by pollyhendra
Hi, would love a hand with this one and perhaps a base to glue to might help as well. Thanks. (Moved better photo here, was trying to create more space in forum).

by robertw
Hmm, it's hard to tell what shape it is, especially with the central part being washed out. It also quite possibly doesn't have as much symmetry as you might think, ie maybe only dihedral symmetry, not icosahedral or octahedral.

I think I'd need more info to replicate this one.
by guy
I estimate around 48 points, by: counting all the points in its outline, adding all the visible points within its outline, then assuming that the same number are hidden round the back. 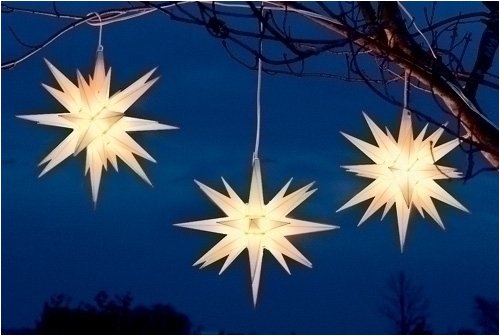 by guy
Yes, you are right.

And yes it is augmentation not stellation. There might well be a convex core that can be stellated to give the correct result, but it will be a different polyhedron and not suitable as the model core.
by pollyhendra
err um... Got the Archimedes model up. Now very simply, could you please give me a step by step for geometrically-challenged dummies?
by robertw
Try following these steps:
by pollyhendra
Thanks for both helping. I'm currently finishing a model at the moment. Incidentlally, Rob, might pay to throw 'Moravian stars' into your keywords for Stella, as they are very popular and templates impossible to find. Thanks again.
by pollyhendra

Quite happy with the 26, found the 50 a bit busy. Will continue to play around with this one, Thanks again.
by guy
Congratulations.

by pollyhendra
Hey guy, fraid I left that one unfinished as I realised it was too busy. I will be tackling the 26 version again though - a breeze compared to the 50. I thought I'd like to leave a perimeter around the base of the augmentations though. Any idea how? Perhaps this picture will explain what I mean.

by Ulrich
You can morph the rhombicuboctahedron to its dual by expansion up to say 20 %,
save it to the memory and retrieve it again. Then you do the augmentation of the
squares and the triangles:

Ulrich
by pollyhendra
Terrific. Now for the geometrically challenged, that step by step goes....?
by Ulrich
You load the Rhombicuboctahedron and click on the fifth icon from the right in
the last row (onmouseover you see "Morph Duals by Expansion"). Then you
keep the ctrl-button pressed, click the left mouse button and pull the mouse to
the right. Rectangles appear between the base model's faces and in the top
left edge of the window you see the degree of morphing. You stop the mouse
movement when it is at 20 %. To save this stadium you hit "m" and "1". To get
it back you hit "m" while the shift-button is pressed and click on memory 1.
Then you activate the base polyhedron view again and do the augmentation as
you did in your former model.

u.
All times are UTC
Page 1 of 2
Powered by phpBB® Forum Software © phpBB Limited
https://www.phpbb.com/