Well I thought I'd start a thread about making fractal polyhedra in Stella. Here are some examples, starting with George's and then some of my own:

So I encourage others to post their own images of fractal polyhedra created in Stella, and discuss techniques for their construction.

I don't know that this is truly fractal. I got this idea while working with Jim's Molybi polyhedra

Take any antiprism (or prism for that matter) and shrink one of the major polygons on one side, but keep it regular. Attach that to the faces of any polyhedron with matching faces. Then attach them again to the smaller faces canonically.

Regularity of the major faces doesn't matter, as long as the one major face is the same shape as the the other and a minature of it. The connecting triangles or squares can be distorted and would alter the appearance of the finished fractal polyhedron making it perhaps gnarled.

This concept could be extended beyond prismatics but I think ultimately some kind of symmetry needs to be maintained.

I will attempt to attach an image. Here is Ti with pentagons and hexgons treated in this manor. some time ago, I made lots of such structures: 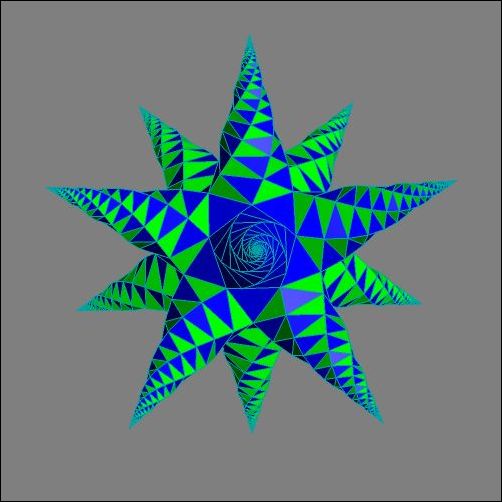 
In a similar way, you can produce pretty spirals: 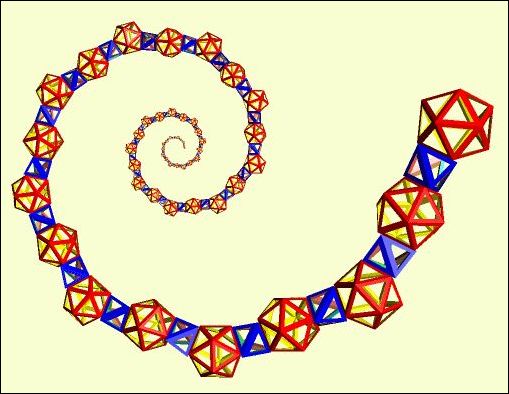 These are very nice. The second one, upon opening, I find is actually a 2D spiral like a snail shell. Interesting. Stella is downsizing each icosahedron as it goes.

These all probably have some fractal properties. What the actual fractional dimension is would be a math problem. I would say that since we are starting with 3D objects then the fractional dimention must be between 3 and 4.