Has any one tried converting Stella nets into files that can be imported to a Cricut machine?

I tried converting a .JPG into a .SVG in Adobe Illistrator, but it didn't look very precise.
Top

Rob, doesn't Stella offer svg vector output for nets and perspectives? These can be displayed directly in any modern web browser, or printed off, and crucially at any scale without loss of detail. They are even cross-platform.
Sorry I can't check my own copy, I no longer run Windows and am not yet confident enough to try an unproven app with WINE.
Cheers,
Guy. Guy's polyhedra pages
Top

Nope, sorry, Stella sends nets direct to the printer. I think people have used print-to-PDF, but not sure how flexible that output is.

Can you print direct to the circuit machine?

Wow, this thread is over 10 years old now! Since then I did buy a Cricut cutting machine. It would be tricky to use with the current version of Stella, but I'm working on some features to add support for it (and hopefully other cutting machines like Silhouette).

I found quite a few issues with Cricut that were hard to work around, both their hardware and their software, but I think I have a fairly streamlined process now.

One great feature is that it can hold two tools at once, so you can do both scoring and cutting in one go. The biggest issue though is that the scores and cuts don't quite align with each other! They are offset by 1mm or so. Has anyone else noticed this? Does anyone have a Cricut that doesn't do this? I've tried two machines and they both did it. It seems constant across the page though, so you can work around it by offsetting the score and cut lines in the opposite direction first. I've added a way to provide this offset in Stella, but I don't have a good way to calibrate it yet (to measure the offset, which may be different from machine to machine, and maybe even day to day).

A new version of Stella will still be a while off, since I'm not really close yet, but getting there!

I used the Cricut to build this model:
https://www.software3d.com/WebbToroid.php 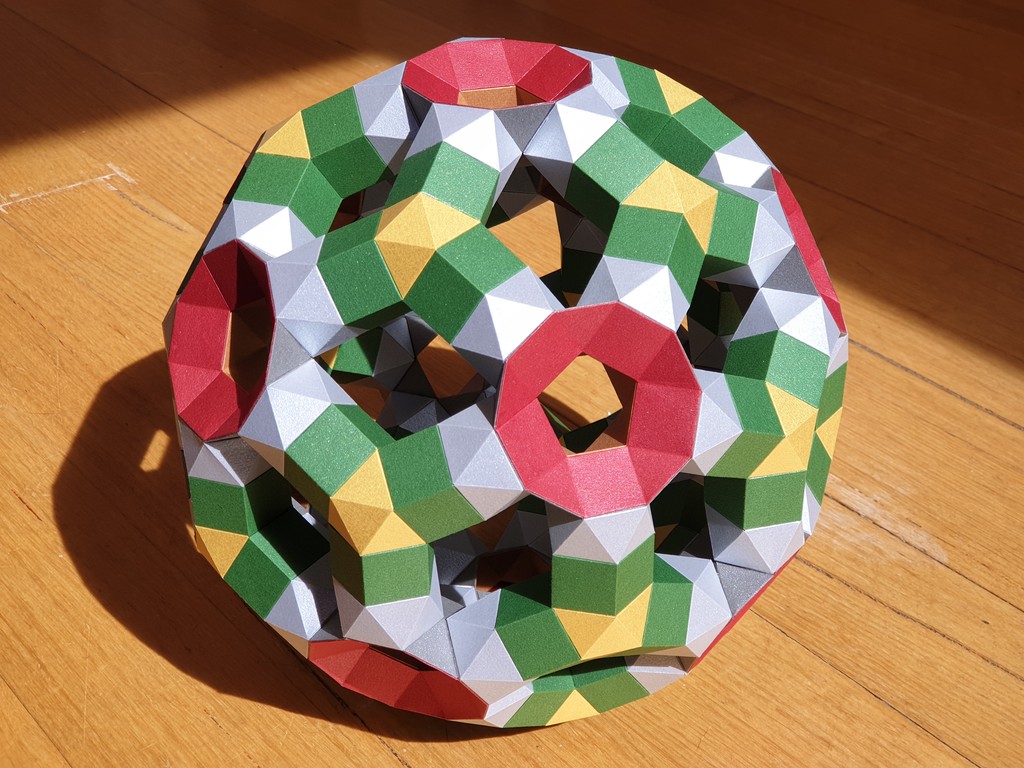 Hey there...I had one thought...I dont have a Cricut Maker yet so I cannot test it, but they sell a scoring wheel tool that fits into the same housing as the cutting tool. Swapping out the tools adds a step in the process but maybe that would correct the alignment issue.
Top

Hmm, the scoring wheel must be new since last I looked. I have a scoring tool that's more just a point. Either way I doubt the alignment is the same.

Swapping out the tools may just add another opportunity for the alignment to go out, but who knows. I haven't tried using the scoring tool in the same slot as the cutting tool in two separate passes. But as long as the offset can be adjusted for, it can work using both slots and a single step.
Top

I tried converting a .JPG into a .SVG in Adobe Illistrator, but it didn't look very precise.

I have a Silhouette Cameo, and although most of my cutting is topvinylcutters, it should fit well for paper and some other stuff not specifically intended for the machine. Even though I'd most definitely go for the Cricut if I had to make the option between the Silhouette Cameo and the latest Cricut Explore. It tends to have a greater cutting force and depth, though officially undeclared.

In my eyes, other Cricuts are useless because they can not cut custom files and as far as I know, need some stupid cartridges.

When you buy, look past the manufacturer's alternatives to alternative tech solutions as well.
My Life My Style
Top
Post Reply
7 posts • Page 1 of 1